For a layman a Map can be described as the depiction of the geographical boundaries of some particular area.

Kerala is located at the extreme southern tip of the Indian subcontinent, blocked between the Arabian Sea to the west and the Western Ghats to the east. The coastal state that extends a length of 580 km varies between 35 and 120 km in width. Kerala is bounded by the state of Karnataka on the north and northeast, Tamil Nadu on the east and the Arabian Sea on the west.

Based on geographical features, Kerala has been divided into hills and valleys, midland plains and coastal belts. Eastern Kerala consists of land encroached upon by the Western Ghats; the region thus includes high mountains, gorges, and deep-cut valleys. Central Kerala comes under midland plains and the coastal belt is relatively flat, teeming with paddy fields, groves of coconut trees, and heavily crisscrossed by a network of interconnected backwaters. 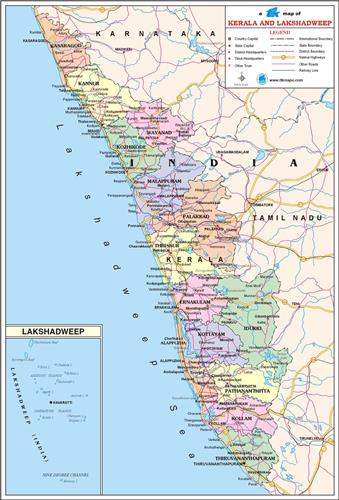