Business and Economy in Kerala

Business and Economy in Kerala

The name Kerala comes from kera - coconut in Malayalam - aptly indicating a land of coconut groves spread over the length and breadth of this beautiful land on the eastern coast of India. The land is blessed with every beautiful facet of nature that God could have bestowed upon it. The mountains, the verdant hills and plains, the beautiful sea beaches, the wondrous backwaters are all that make Kerala truly ‘God’s Own Country’. The land is surrounded in the west by the Arabian Sea and by the undulating grand heights of the Western Ghats in the east. It has a long coastline of 580 kms along the Arabian Sea. 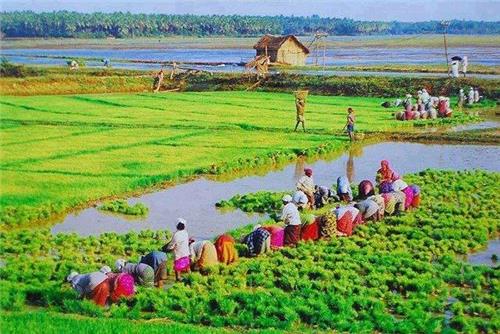 The land of Kerala can be easily divided into three distinct regions which have played an important role in making the economy and business of Kerala with its own particular flavour. The first part is the coastal line of the Arabian Sea, the second is the slowly descending midlands and plains and the third is the hills and valleys of the east.

A very important feature of the eastern land is the continuous wall of the Western Ghats that makes Kerala a blessed favourite of the monsoon gods. In fact, except for the Palakkad pass the Ghats stand as the eastern sentinels of Kerala in a long unbroken range rising to an average height of 1500 meters. This high range helps in making the first landfall of monsoon on the coast of Kerala.

Kerala is a unique state of India. The mazelike backwaters of Kerala are a unique geographical formation. A network of canals joins the backwaters and provides a unique inland water system in Kerala. The land of Kerala has the highest number of performing elephants in India and it makes a unique cultural heritage of the temples of Kerala. This land has the distinction of being the earliest of the trading centres with the outside world. The Arabs traded with India from here as early as 8th century, the Dutch and the Britishers came in 17th and 18th centuries and established trading ports of Cochin, Quilon, Allepy, and Cannanore.

The state has many firsts in its name. It is the first state with a 100% literate population. It was the first to introduce land reforms and education reforms bills. It has the least infant mortality rate in India with highest life expectancy of its people. It is the only state where the ancient Ayurvedic system of medicine is still the highly preffered medical system with several medical colleges and Ayurvedic pharmaceutical companies of world repute. It has hospitals at every village. Kerala had always been a land of industrious people with good businesses of marine and agrarian products.

The state has made major strides in all the 3 sectors of economy, viz. the primary, the secondary and the tertiary. Remittances from the NRIs especially from the gulf countries make a strong contribution to the economy of the state. 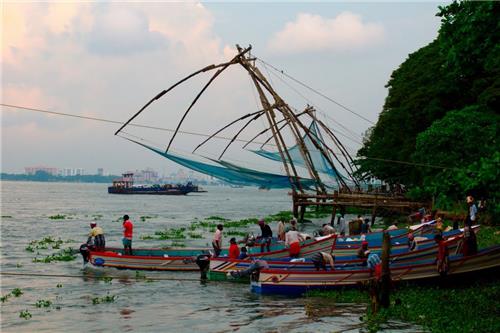 It consists of agriculture, fishing, animal husbandry, mining etc. Kerala carries all these activities to its full potential. Kerala is a major producer of spices. It has been the prominent export zone of spices from India to the outer world since centuries. Pepper, cardamom, vanilla, cinnamon, turmeric Nutmeg and ginger are some of the major spice products of Kerala. In fact, Kerala produces 97% of pepper produced in the country. Another major cash crop of the state is natural rubber. Paddy fields, dotted all over by the side of the natural backwaters of Kerala, make rice to be the staple of Kerala. It is the staple diet of Keralites along with coconut. Mango and Jack fruit are the main fruits produced in Kerala.

Fishery is a very important activity in Kerala. God has provided it with a 590-km-long coast line abundant backwater stretch full of fish along with the exclusive Economic Zone in the Arabian Sea well beyond the continental shelf of the peninsular India to have abundant opportunities for marine fisheries. This activity is divided into 2 sectors that are the marine sector concerned with coastal fishing with both motorized and non-motorized fishing vessels and the inland fishery that is mainly with non-motorized vessels. This has made fishery and associated works a major employment provider in the state. There are more than 2.3 lakh fishermen directly involved in fishing and making it a very important and one of the major economic activities in Kerala. The total number of people associated with fishery in Kerala is about 11 lakh.

There are more than 300 types of fish caught in Kerala but the most important from a commercial point of view are prawn, seer and pom fret. The activity does not remain limited to collecting the fish. It further spreads to making and repairing of nets and fishing crafts, fish processing and marketing. It also gives employment to people engaged in exports of the products. Thus, this sector gives livelihood opportunity to a large number of the people in Kerala.

KSCADC has been entrusted with the job of coastal area developmental work in respect of fishing areas. The concept of Model fishing village has been started by the council with a corpus of INR 160 crores in 2012-13. The Integrated Coastal Area Development Programme, the RIDF schemes in collaboration with NABARD and opening of schools for fishery are some of the schemes undertaken to develop the fishery activities in Kerala. The developmental work in this sector is the responsibility of the Department of Fisheries.

A very important factor in the agro development is the Joint Venture of central and state government termed Kerala Agro Industries Corporation Ltd. The corporation was established in 1968 to promote the use of modern technology in agriculture. It has promoted a lot of mechanization in agricultural techniques used by the farmers for tilling the land to reaping the harvest. This JV has successfully worked towards facilitating various governmental schemes in reaching the farmers. 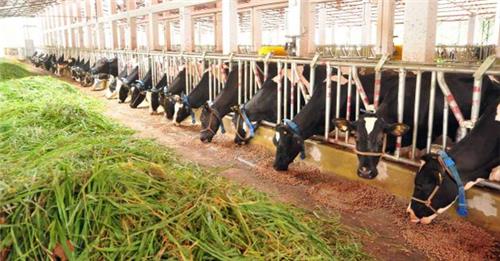 The government of Kerala planned to develop its livestock and provide increased employment to villagers and backwater inhabitants. It established the animal husbandry department in 1956. The main aims of the department were to improve the availability of better cows, buffaloes, poultry, piggeries etc. It zeroed in to attain these aims by: improved veterinary services, artificial insemination, opening of 4 model livestock farms, mobile veterinary units to help farmers, pig farms, poultry farms, goat farms etc. The most important action to improve the livestock population by people’s participation at the grass-root level was to hand over a lot of schemes, Veterinary dispensaries and hospitals to the Gram Panchayats. The establishment of Kerala Livestock Development Board in 1976 was another right step in this direction. It has helped a lot in improving a new breed of cows and buffaloes in Kerala. This has helped in the constant upward production of milk in Kerala.

Some of the major agro-based businesses in Kerala are given below.

The manufacturing sector of Kerala has come out of ages. The state boasts of some very good businesses in the manufacturing sector. An important feature of the development of the secondary sector has been the active governmental promotional efforts to improve the IT sector in Kerala. The Kerala State Industrial Development Corporation Ltd. has played major role in promoting industries in Kerala.

The Directorate of Industries & Commerce has been entrusted with the job of financing and promoting the medium and small-scale enterprises. The directorate controls 14 district industry centres that provide the all inclusive help required by small scale investors. It also controls the Common Facility Service Centres situated at Manjeri and Changanacherry. Some of the main industries in Kerala are as follows.

Kerala is one of the most important states in India with respect to the marine product industries. The Marine Products Export Development Authority works towards the promotion of processing and marketing of marine products. Ernakulum and Kochi are the major hubs of these activities in Kerala. It has hundreds of concerns that provide the processing, marketing of sea food. Some of the famous enterprises of marine products of Kerala are as follows:


IT Industry in Kerala

The government has also taken a unique initiative by way of establishing an ITES Habitat Centre in Kochi. This is a special provision zone dedicated to the training and facilitation for the IT industry. There are more than 25 firms working in the centre.

Technopark of Kerala situated in Thiruvananthapuram is the largest IT Zone in India established in 1990 exclusively for IT enterprises. The park has all the major IT players like TCS, Infosys, ITC InfoTech etc. Some of the companies in Kerala other than in the Technopark are as follows. 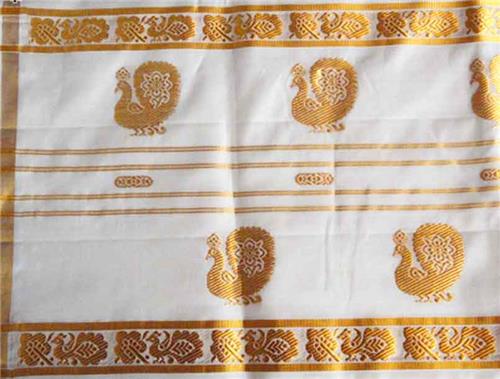 The textile industry in Kerala consists of spinning, manufacturing yarn, weaving, fabric making etc. It includes the handloom enterprises. The big textile sector providing employment and livelihood to thousands of homesteads is actively promoted by a Kerala State Textile Corporation. There is a separate directorate under the Department of Industries and Commerce to promote the cause of handloom and textile. The directorate plans and coordinates various schemes of the government for the promotion of handloom. It aims at making the Kerala handloom a force to reckon with globally by improving the quality, providing international exposure, training, opening of special handloom parks etc. It also undertakes handloom expos to promote the industry. Thiruvananthapuram and Kannur are the major centres of the handloom sector in Kerala. An important feature of this sector is that close to 94% of the looms have been brought under the co-operative sector. There are more than 660 weavers cooperatives in Kerala.

The state of Kerala has taken up the work of tourism development as an industry. The Tourists Resort Kerala Ltd. has been entrusted with the job of finding and implementing the developmental programmes for the promotion of tourism in Kerala. The state tourism department works towards the improvement of potential tourist areas. It invites the private players also to improve the facilities for the tourists in those areas. The government agency fully dedicated to the job is the Kerala tourism development corporation. It has its offices in all the districts of Kerala. The KTDC is a profitable corporation that owns and operates tourist facilities like hotels, motels, package tours, rest houses and resorts in several important tourist spots of Kerala. Its premium range hotels are 5 star and 4 stars hotels. The Value plus are 3 star hotels aiming at the business class of people. The Tamarind Eaze are budget hotels while Aaram range is a chain of less expensive motels on the highways.

This is one of the fast emerging sectors of the economy of Kerala. There are some institutes that are making a name in this sector. Rajiv Gandhi Centre for Biotechnology is one of the fastest growing centres of excellence in bio-tech. It is situated in Thiruvananthapuram. The institute was established in 1990 for the development of education science and technology called C-DEST. It was recognised as a centre for learning by the government of Kerala in 1991 and named after the former Prime Minister Sh. Rajeev Gandhi. It has created a name for itself in promoting research and innovation in the area of Bio-technology.

The first privately developed bio-tech park called Kinfra Hitech Park Kalamasserry, Kochi is slowly developing as another centre for the promotion of bio-technology in Kerala. The park has been developed by the Chatterjee Group. It has been boosted by the government by declaring it the status of a SEZ in 2009 with all the corresponding facilities. The park has dedicated 70% of its area to Biotech companies, institutions of excellence in the area and hardware units. L. J. International Ltd. a company of A.V. Thomas Group has a well established bio-tech division at the CSEZ Cochin. Liv Bio Pharma, Kottayam is a fast upcoming name in producing Pharmaceuticals sans preservatives.